What are you looking for?

Jab We Met Frame with Your Photo | Anniversary Gifts for Couples

With images(0)Verified(2)All stars(2)
lakshmibanik
Rated 5 out of 5
gifted to my husband on our 1st anniversary and it was great, we remembered the moments of our first meet, its a nice frame
Helpful?
0 0 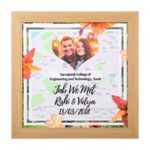 arpitrajagopal12
Rated 5 out of 5
This is a nice gift for anniversary, i gave it to my wife and she was so happy to see the details of our first meet on the frame
Helpful?
0 0

Love never fades with time, rather it strengthens itself and becomes more vigilant and beautiful. Though we cannot see its form with our own eyes, we can definitely feel it, experience it, and cherish it. Love is something which you can never define with words, because it’s a feeling which is portrayed with gestures like cuddling, giving gifts, and even treating one another with warmth and affection. It doesn’t matter what’s your age, and how much you both have come in your marital life, your love is something which will always walk with you, never leaving you behind in the middle of the mayhem. And that’s why perhaps the anniversary is so momentous!

Anniversary is the day when you walk down the memory lane with your loved partner and witness everything that had transpired in the sweet bygone times. And it is these occasions which must be celebrated with enjoyment and merriment. But no anniversary is complete without the perfect and unique anniversary gifts, is it?

HAVE THE BEST ANNIVERSARY GIFT FOR HIM

Love isn’t based on factitious mannerism and social status. It is solely a decision of our hearts, one over which we can never exercise control. You can never control loving a man with whom you will fall in love. And that’s why an anniversary is so special. And perhaps that’s why the Jab We Met frame is one of the best personalized anniversary gifts for him. In fact, this is one such anniversary gift which defines the meaning of the occasion.

Just ask yourself, why do you even celebrate anniversary? Is it just because you buy an anniversary gift for your loved one?

Well, no, anniversary is a moment when you both remember the past moments, bask in the warmth of the budding love between you both, and decide to make your relationship more resolute, so that the coming anniversary will be full of such equally precious memories. And that’s why the Jab We Met frame is perfect for an anniversary gift. The date where you both first met will be written in a beautiful manner on the frame, reminding you the very moment when you both started on this journey together.

BUY THE BEST ANNIVERSARY GIFT FOR HER

And what can be better than the Jab We Met photo frame which is perhaps the best first anniversary gift? All you need to do is choose the best picture you have with her, write the date and place where you both met. Won’t it be the best anniversary gift for her? After all, anniversary is the day when you look back into the bygone times, and cherish the memories you have. Yes, this can’t be the single anniversary gift that you give her, now can you?

When the woman in your love has done so many things, some daring, some crazy, and some done out of affection, isn’t this your responsibility to make the anniversary special for her? And that’s the reason this anniversary gift is here, where you can mark the date from when your journey started, not as a single individual, but as two strangers ought to seek comfort and solace in one another.

The span of twenty-five years is a long time, and in all these years, you both have faced hardships as well as moments of sanctity and tranquility, both of which are worth remembering. These memories will remind you of things you both have achieved in the long run. So, to cherish these moments, you need the perfect anniversary gift for couples which will be simple but extravagant in the feelings it emanates.

Now, when you are looking for the best anniversary gift, the Jab We Met frame is one of the best 25th anniversary gifts, which will always remind you both of the times you have spent together. And the beautiful message you will write on the cover for your loved person is actually the most luring thing. There is no doubt that your relationship has witnessed a lot of ups and downs, has gone through numerous thick and thins, and perhaps that’s why this anniversary gift will remind you of those times when despite being on the verge of losing everything, you both never left each other’s side.

So, don’t contemplate over your thoughts and immediately buy this anniversary gift which will make your anniversary more special, and more euphoric.

Delivery Across India
We Deliver to All Parts of India

There are no reviews yet.